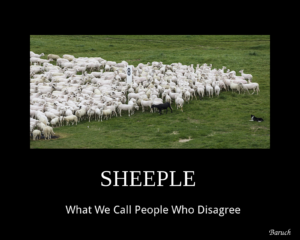 For example, UFO enthusiasts routinely accuse people – especially scientists – of being afraid to face the truth about UFOs. A similar attitude prevails among those who believe in psychic phenomena, free energy, or almost anything not generally accepted within the scientific community. Scientists are “afraid” of the truth, and therefore refuse to even look.

I propose a much simpler and probably more accurate explanation.

If your car develops some problem – an unfamiliar noise, odd behavior, something that may indicate trouble – you take it to a mechanic. If it’s something unusual, you might invite him to take the car for a short drive to see (or hear) for himself what the problem is. He may recognize the problem and be able to fix it.

If the noise is intermittent, only happening once in a while, your mechanic may not hear it during his spin around the block. If he doesn’t hear it, he may not be able to say what the problem is.

Of course, if he drove your car every day, sooner or later the noise would manifest and he could probably identify it. The problem is, he’s got other cars to fix and can’t spend a whole lot of time listening to your car. How long should he reasonably be expected to listen for your mysterious noise, when he’s got other things to do?

Contrary to what is said about them, most scientists love a good mystery. No scientist gets famous by staying within the domain of what is already known. Sure, some scientists really are afraid of the truth, just like with real people. But most are curious and willing to entertain bold, new, and even bizarre ideas. They just need convincing evidence of the new notions.

That’s pretty much like your mechanic when he doesn’t hear that rattle or grinding noise that’s been bothering you. He’s not hidebound. He’s not afraid of the truth. He’s not part of a cover-up. He just didn’t hear the noise, and doesn’t want to spend valuable time driving around listening for it, when he’s got other things to do right now.