Posted by seeker Posted on May 12, 2014
Posted in Ancient Mysteries 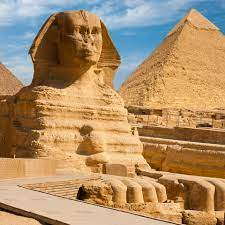 Until recently, the Sphinx wasn’t considered much of a mystery. There it sat, right by the Great Pyramid, a large but ordinary-looking sculpture located close to one of the most mysterious structures ever built. Sure, the Sphinx might have a hidden chamber or two, but mostly it was just this big statue carved out of the rock, no more mysterious than Mt. Rushmore.

Then a couple of guys came along and came up with this really weird idea that seems to screw up everything. These were John Anthony West and Dr. Robert Schoch. West was a normal person; Dr. Schoch is a geologist.

West came across a text about the Sphinx that commented, as an aside, that the Sphinx showed a pattern of water erosion. West looked at the Sphinx, and sure enough, to his layman’s eye it did look like water erosion. Not that he’d know water erosion from borshch. West sought confirmation from a geologist. Apparently he had to try a few geologists before he found one willing to consider his idea. That was Dr. Schoch.

Dr. Schoch examined the geology of the Sphinx and agreed that the erosion appeared to be caused by water, not by wind-driven sand. This wouldn’t garner much attention, except that the Sphinx is in the middle of the Sahara (technically it’s on the edge, but even so). The forecast is clear and dry for the next thousand years. Probability of precipitation, zero. It probably rains more in a day in, say, Chicago, than it did in the Sahara in the past thousand years. So – where did the water come from, that did all this erosion? Aye, there’s the rub…

The Sahara wasn’t always dry. According to Dr. Schoch, the region was temperate about 9,000 years ago. There’d be plenty of rain to erode the Sphinx back then. Dr. Schoch suggests that the Sphinx was exposed to erosion then. That would make the Sphinx thousands of years older than it has been dated.