Posted by seeker Posted on October 20, 2013
Posted in Ancient Mysteries 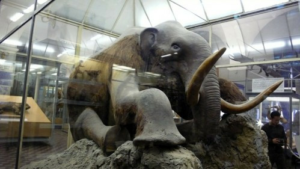 The Beresovka Mammoth was found in Siberia in the early 20th Century. Its body had been relatively well preserved, frozen for about forty thousand years in the frigid tundra. There were a few mysterious facts that puzzled researchers.

First, the remains showed no signs of being eaten by scavengers, as you’d normally expect when anything dies. There were buttercup flowers in the animal’s mouth, and undigested food in its stomach. Apparently the animal had died suddenly while eating. and had then frozen quickly enough to stop the process of digestion.

Scientists explained the lack of scavenger damage by suggesting that the animal had fallen into a crevice and been covered with snow or gravel that would have protected the carcass from other animals. The presence of fractures in some of the mammoth’s bones supports this possibility.

More puzzling was the presence of undigested material in the animal’s stomach. After death, enzymes in the stomach will normally continue the process of digestion for several hours. Because of this, food remaining in the stomach at the time of death will be digested. This didn’t happen with the Beresovka mammoth.

One theory to explain this was that somehow there had been a sudden, deadly drop in temperature. If the temperature dropped fast enough and low enough, it could freeze the carcass and stop the digestive process, leaving the food intact.

There are problems with this theory, however. First, it takes time to freeze an animal that big. A side of beef takes thirty minutes to freeze at a temperature of -40° F. The mammoth was massive, still warm, had its internal organs, and was covered with a woolly hide that would have insulated it. It is estimated that in order to freeze in a half hour, the temperature would have had to be below -150° F. If it took much longer than half an hour, the stomach contents would have been digested.

Adding to the complications, the temperature would have had to drop quite suddenly. Since the mammoth was eating buttercups when it died, we know that it had to be in the late summer or early autumn. It may have been cold then, but it was still mild enough for there to be buttercups. Suddenly – within a matter of hours at most – the temperature would have had to plummet fifty or more degrees, possibly more than 100 degrees. We don’t know of any mechanism that could cause that.

There is no shortage of ideas about how such a sudden, extreme drop in temperature could come about. Most are based on an imperfect grasp of facts. None is satisfactory. At the moment we don’t have credible evidence to support the theory of a sudden freeze, nor any plausible way to explain how it might have come about.

On the other hand, we also don’t have any better ideas about why the Beresovka Mammoth still has buttercups in its stomach after forty thousand years.