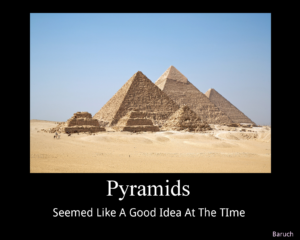 Pyramids – What were we thinking?

The pyramids of Egypt – and in particular, the Great Pyramid of Giza – are among the most puzzling and contentious productions of human endeavor. In fact, one argument is whether the pyramids were built by humans or by aliens. The reasoning seems to go: “I don’t know how they could have built the pyramids. Therefore, it must have been aliens.” Such reasoning is wearisome; I’m going with “forgotten technology.”

Some years ago I read a book that assured me the Pyramid (of Giza) was level to an accuracy that could only have been attained using lasers. How else could they get it so exact? I was impressed by that logic until another author suggested that the Egyptians used water-filled trenches to provide the reference level. Water would keep the same level, even hundreds of feet away, making it simple enough to get the Pyramid leveled. So much for requiring lasers.

I haven’t seen any convincing explanations of how they dragged (or levitated) millions of multi-ton blocks to make these things. But I’m thinking there’s some simple answer out there that someone will come up with, that would explain how it is possible to build pyramids without aliens. I just can’t imagine anyone traveling trillions of kilometers to help us make a big pile of rocks. And shove probes up our asses.

Probably more of an issue for me is why did they build them? However it was accomplished, building the Pyramid had to be difficult. Egyptologists have made the project even more difficult by limiting the time frame to twenty years, and restricting the tools to ones made of copper or bronze, ropes, and wood. Not even the wheel was allowed, according to the Egyptologists.

I haven’t seen any explanation for why Egyptologists impose these restrictions. Whatever the reasons, I am skeptical that they all applied. Possibly none applied.

For example, if there are really two million huge blocks in the Pyramid, and if the project took only 20 years, then working around the clock they had to set 11 or 12 blocks in place each hour. I’m guessing that, since it gets dark at night, and since they hadn’t built a power grid capable of illuminating such a large area, they probably couldn’t work through the night.

So we’re looking at setting into place a block every three minutes. Blocks that weighed a ton or more each, and that were somehow fitted together so tightly that you can’t get a razor blade between them. Aligned with tolerances approaching the limits of what we’re able to do today. With ropes and wooden supports, using tools made of copper and bronze. Right.

Even if this were possible, it’s a huge investment in time, labor, and resources. Did Pharaoh do all this just to build a tomb? Maybe. People can have huge egos, and guys like Pharaoh were powerful enough to indulge in them.

The problem is that the Pyramid isn’t built like other tombs in Egypt. Egyptian tombs were covered in hieroglyphics that contained prayers to the deities, curses for grave robbers, and instructions to the deceased on how to properly be dead (kind of like that book for the recently dead in Beetle Juice, I guess). There are no such hieroglyphics in the Pyramid, making it less likely that it was a tomb.

OTOH, if it wasn’t a tomb, what other reason could Pharaoh have for investing so much into it? Facts are in short supply, which has never led to a shortage of theories. Among the more colorful notions is that the Pyramid is a power source or a beacon for space travelers.

I don’t buy the beacon idea, but I could see the Pyramid as being a power source of some sort. No power has been observed to come from the Pyramid, but possibly it’s an unknown type. Or maybe the Pyramid no longer works – it’s been damaged, vandalized and mutilated. That may have caused it to stop working.

This entry was posted in Ancient Mysteries. Bookmark the permalink.
Back to Top ↑