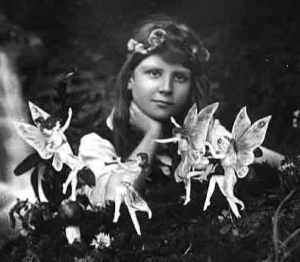 Before There Was Photoshop

In 1917, two girls borrowed their father’s camera and took some photos in their back yard. When the photos were developed, they showed several fairies dancing and playing in the yard as the girls looked on. For the first time there was photographic evidence that fairies exist.

Many people were convinced of the authenticity of the photos, including famed author Sir Arthur Conan Doyle (who created Sherlock Holmes). He wrote a book entitled “The Coming of the Fairies” in which he described the beginning of a new age where previously hidden things would be manifested – including fairies and psychic abilities.

In our jaded time of Photoshop and special effects we may find these photos painfully obvious fakes; but back in 1917 photography was new and people weren’t as quick to identify the various clues that give a fake away. In fact, some photographic “experts” declared the images genuine. Apparently these experts were looking for evidence of tampering with the negative. They seem to have overlooked the possibility that the girls had cut out pictures from magazines and drawn other images, gluing these onto cardboard for support.

At the beginning of the 20th Century there was huge interest in psychic phenomena, spiritualism, ghosts, ESP, and the like. Part of this was likely a response to World War I, during which many people lost loved ones. Many people attended séances, seeking comfort in hearing from their deceased relatives from the “Other Side.”

At the same time, science had just begun to hit its stride, finally getting past its history of alchemy, astrology, and other quasi-scientific studies. It was a time of exploration using new tools, and many topics were considered that would now bring discredit. Spiritualism was one such topic. The scientific investigation of such occult matters was called “parapsychology.”

Conan Doyle’s interest in parapsychology may have been fueled by his grief over the loss of his son during the Great War. Some unkindly claim that Conan Doyle’s once sharp mind had become dulled and gullible as a result of grief and age. This is unfair. Conan Doyle was simply relying on the evidence available to him, which wasn’t as clear then as it may seem now.

At any rate, the girls later confessed that they’d posed the photos themselves, and hadn’t actually photographed any fairies. However, they both insisted that they had seen actual fairies in their back yard.