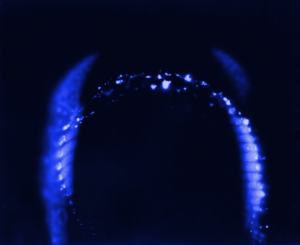 Kirlian photography is a technique of acquiring photographic images through the use of high-voltage electricity. It was developed in the Soviet Union by Semyon Kirlian and his wife Valentina during the first half of the 20th Century.

The technique consists of applying a high voltage to the subject. Since the subject is usually organic and often alive, precautions must be taken to limit the amount of current so as to avoid injury or death. The area of interest is applied to a photographic film which is in turn in contact with a grounding plane. When done correctly, the result is that sparks known as coronal discharge are emitted by the subject and detected by the photographic film. When developed, the film will show the pattern of the sparks.

It is often claimed that the images produced by Kirlian photography are of the subject’s aura. This claim is unwarranted. What is being imaged is the pattern of sparks between the subject and the photographic medium. We’re not seeing an aura. We’re seeing electrical sparks.

That doesn’t mean that there isn’t an aura. There could be. It just means that Kirlian photography isn’t displaying it.

That also doesn’t mean that Kirlian photography has no value. The images display the manner in which electricity flows through the body. This flow can be strongly influenced by the body’s state of health – its temperature, the amount of water in it, electrolytes, and other properties. There is no reason why such images that depend on these properties can’t be used to ascertain the state of health of the body.

Unfortunately, not much work has been done on Kirlian photography, at least in the West. Since it was developed during the Soviet era, much of what was learned was kept secret. I don’t know whether this research has subsequently been published, nor do I know whether anyone is continuing the research in Russia.

It seems to me that the entire field of biologically-produced electrical fields has been overlooked. Kirlian photography is probably the tip of the iceberg.