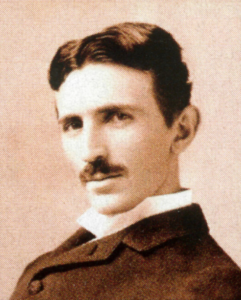 Nikola Tesla was an ideal “Mad Scientist.” He was a genius, an original and idiosyncratic thinker who often spoke his mind and made outlandish claims. Unlike most who talk trash, Tesla made good on many of those claims.

Tesla immigrated from Serbia to the US at the turn of the 20th Century. He worked for Thomas Edison, then George Westinghouse. Tesla made important contributions to the theory of alternating current and took out over a hundred patents. He was prolific and creative, but also impractical.

Tesla dreamed of transmitting power through the air so that anyone, anywhere could have power without needing wires. He built a huge tower for this purpose at Wardenclyffe, in Long Island. This was to be a prototype to demonstrate the concept.

Unfortunately, funding dried up and the project had to be abandoned. Entrepreneurs were unwilling to finance a project that wouldn’t permit them to make money from it. There would be no way to charge people for the transmitted power.

Tesla was an idealist, working to improve mankind’s lot. He was constantly thwarted by businessmen who demanded a profit on their investments. Ultimately Tesla withdrew from society, secluding himself in his New York hotel room where he died penniless in 1943.

Tesla occasionally made claims that garnered media attention. He described a death ray that could knock airplanes out of the sky or kill troops from a distance of hundreds of miles. Although Tesla built many powerful and awe-inspiring inventions, he never developed this weapon.

Much romantic bullshit surrounds Tesla and his inventions. One outlandish claim was that Tesla faked his own death and worked with Marconi in a secret jungle lab on the top of a mountain in South America, where they developed a flying saucer that they used to go to Mars, where they built the Face of Cydonia and the nearby, five-sided pyramid in order to signal that they were there. The Website making this claim has disappeared, unfortunately.

Others claim that the US Government stole Tesla’s papers following his death (apparently this part is true), and used them to develop secret technology including antigravity and free energy.

These claims are baseless. Whatever the government stole from Tesla’s estate, it didn’t lead to any leap in technology. There’s no evidence that antigravity, free energy, or a death ray have been developed.

Tesla was indeed a genius, but his stolen papers didn’t lead to major new discoveries.